I toyed with a number of ways to entitle this post, before settling on a deliberate word-play on minor /miner. The word miner here refers not to the occupation of my late grandfather’s fellow workers in the Barnsley coalfield, but rather to a much smaller but equally industrious breed – the leaf-mining flies, or Agromyzidae in the scientific parlance. Now, before you stop in your tracks at the mention of a potentially unpronounceable Latin name, it is really worth sticking with it, trust me on this one. 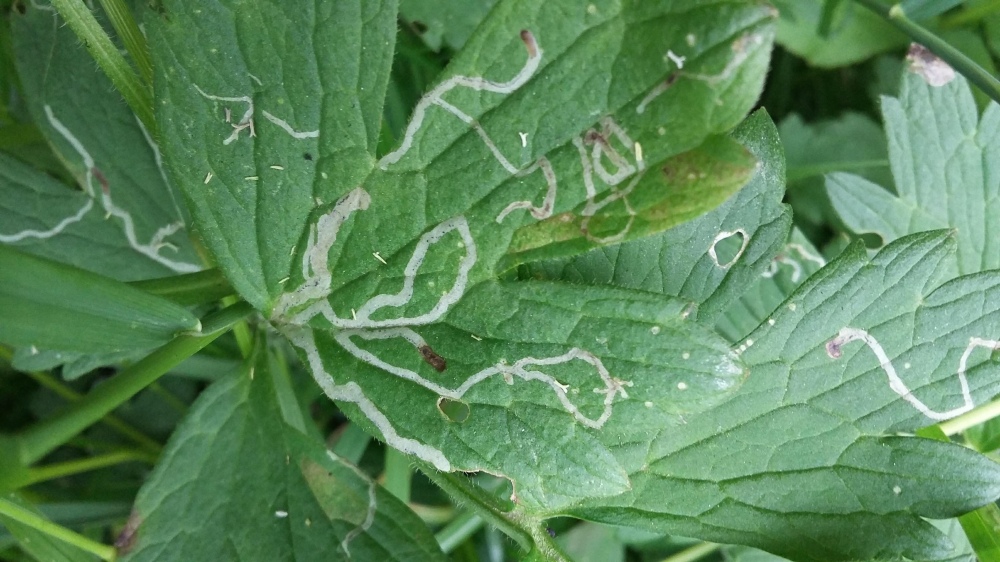 Flies start their life cycle as larvae, as anyone who has secured blowfly maggots on a fishing hook or found ‘leatherjackets’ (cranefly larvae) in their lawn will attest. In the same way that caterpillars are the larval stage of butterflies and moths, which must feed on a host plant before pupating and undergoing metamorphosis into the flighted adult insect, so leaf mining flies begin as tiny larvae munching on leaves.

Or rather in leaves. The difference is that Agromyzids develop inside the leaf of their host plant, within the thickness of the leaf surface, hence the term ‘miners’. The distinctive traces they leave, appearing as blisters on the often in intricate wiggly patterns are duly named leaf mines.

Now it may sound complicated but, thanks to a very responsive and helpful coordinator of a national recording scheme for this group insects, it is relatively easy to contribute valuable observations to scientific understanding of this group simply by finding and photographing mined leaves and sharing them with the scheme on Twitter and I-Record. You can even email the scheme coordinator a friendly chap by the name of Barry Warrington who is likely to get back to you speedily with helpful ID tips and advice, to put you on the right track.

This extract below is from the first newsletter of the Agromyzidae National Recording Scheme, and describes the aims and philosophy of the scheme:

KEY ROLE OF THE NRS

As mentioned at the start of this newsletter, providing help and support to those who record Agromyzidae is a key aspect of the NRS.

It can be rather daunting when people first start recording a new subject. They are often fearful of making mistakes, not sure where or who to approach for help or are very wary about asking for help from ‘experts’.

Of course, it is not only beginners who may feel like this! People with more experience also need help from time to time and not feeling comfortable asking for assistance often leads to them giving up on recording a particular subject matter.

The NRS is always happy to provide all the help it can, in a way which hopefully makes the individual feel comfortable asking for help or assistance.

Since its launch, the NRS Twitter account has answered almost 300 queries, most of which are responded to within an hour.

The NRS has also received over 150 emails, covering various aspects, again, most of which are answered within an hour.

Hopefully, the speed of response and the friendly, enthusiastic way in which queries are handled is appreciated by everyone concerned.

I am just starting out looking for and recording Leaf mines, but suddenly I’m seeing them everywhere. I know I have seen the distinctive ones on holly leaves and even taught field studies sessions on those (Phytomyza ilicis -Holly Leaf Miner, the most often recorded by a good margin due to its ubiquity). But since getting home and mowing the lawn I have even spotted some mines on Astrantia plants, which I know from Twitter Barry has been asking people to look out for as it is very under-recorded. Have I just spotted the first record of this species in Stamford Bridge? Has anyone found it in the York area? I will email the scheme and find out. This could get somewhat addictive, hunting for ‘first records’