On Sunday my main pre-occupation was getting ready for and helping to run a stall  at the village’s now annual summer fair. The stall was for Stamford Bridge in Bloom (SBIB) community group and the fair was held for a second consecutive year on the linear green space of the former railway station at Stamford Bridge in East Yorkshire, through which Sustrans Route 66 now runs.

I began my involvement with the Bloom group some eight years ago, appointing myself Conservation Coordinator, a role for which I saw a niche that I could fill by setting up a Junior wing of the group, The Young Conservers Club to encourage more families and young people to get involved in the movement. In the early days I gave a lot of energy and time to developing this, with work parties almost monthly, creating a minibeast trail in a forlorn corner of woodland, building links with the Primary School, Scouts and Guides, etc. Soon enough I was asked to become Vice Chair as well, which I consented to provided the conservation mission remained my primary contribution.

Well time passed and latterly, following the retirement of our Chairman and founder member, I found myself Acting Chair and figurehead for the group. Furthermore, my  full-time work and family commitments mean that the practical conservation tasks have fallen largely by the wayside, in favour of helping to manage the SBIB group’s capital projects inspired by the heritage of Stamford Bridge (such as the Battle of 1066 and the former railway line and station – more of this another time).

But I digress – So much for telling you of our Summer Fair fundraising stall…which the images accompanying this post illustrate.

The elderflower cordial, as readers of this blog will no doubt have twigged, is a batch of my own making. 🙂 I chose to serve it by the cup, diluted with sparkling water and ice, kindly donated by our local Coop. I am pleased to say it went down rather well.

The other elements of our stall consisted of plant sales, all raised, propagated and donated by our supporters, a confectionary lucky dip for kids, craft items, a cakes table and a raffle of prizes donated by local businesses. As the theme of Alice in Wonderland had been adopted by the summer fair organisers, our nod to the theme was the ‘Eat me’, ‘Drink me’, ‘Buy me’ labels tagged onto our homemade, homegrown, handmade items.

So was this a 30 Days Wild day? Well, if spending the day out of doors from 10 til 4 enjoying a green space at the heart of our community, sipping floral cordial and enjoying the notes of the Song Thrush and Chiffchaff in lulls between live music counts, then I think I’ve earned the T-shirt, so to speak.

Oh, and by the way we raised £234 toward the bloom group’s next projects. 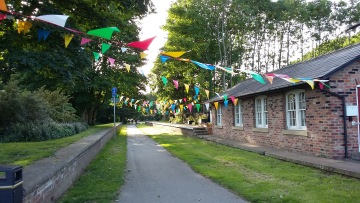 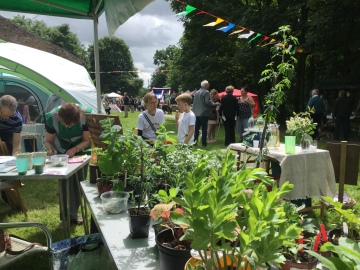